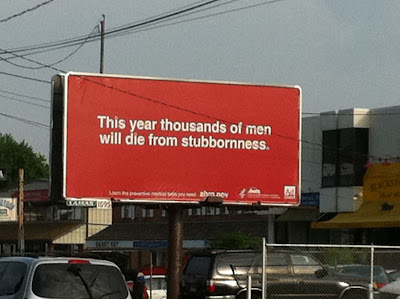 It was almost impossible not to see the giant billboard with the red background and huge white letters that shouted: “This year thousands of men will die from stubbornness.” Later I learned that the billboard was one of hundreds just like it targeted at middle-aged men who typically avoid routine medical screenings and often die from preventable conditions.

Psalm 32 deals with the spiritual disease of sin, which can be treated by honest acknowledgment and repentance. The first five verses express the anguish of hiding our guilt and then celebrate the joyful release of confessing our transgressions to God and being forgiven.

This psalm goes on to show that the Lord longs for us to seek His help in difficulty (vv.6-8) and receive His guidance. “I will instruct you and teach you in the way you should go; I will guide you with My eye” (v.8). We are hindered, though, when we stubbornly refuse to follow His direction and repent from our sin.
God’s Word urges us, “Do not be like the horse or like the mule, . . . which must be harnessed with bit and bridle, else they will not come near you” (v.9). Rather than hold on to our sin, the Lord offers an alternative: When we humbly confess, His mercy shall surround us (v.10).

The first step to receiving God’s forgiveness is to admit that we need it. (RBC)